The paintings of the French artist Claude Viallat have crossed the threshold of international fame since French-based Art gallery Ceysson & Bénétière have opened a new branch in NYC.

Their inaugural show “Claude Viallat. Major Works: 1967-2017″ was all about the co-founder of Supports/Surfaces movement. And the art critic, Jason  Farago, is -among all the critics published at the occasion- the first one to fully understand the very essence of Claude Viallat’s purpose.

The 20 paintings on fabric here by Claude Viallat, rigorously composed yet teeming with chromatic invention, may add up to the most significant postwar art history lesson in town this summer. It is the inaugural show for the American branch of Ceysson & Bénétière, which opened in Saint-Étienne, France, in 2006, and also has spaces in Paris, Geneva and Luxembourg.

Mr. Viallat, born in 1936, is one of the founding artists of Supports/Surfaces, a deep-thinking movement of abstract painters that arose in the South of France in 1969 and that has had pitifully little exposure in the United States. They embraced post-structuralist philosophy not by giving up on painting, as many Americans did in the 1970s, but by treating stretchers and fabrics and pigments as their own subjects of investigation. Mr. Viallat accomplished that by repeating a single abstract form — a nameless shape somewhere between an amoeba and a smooshed pillow — over and over, for decades, on wildly diverse supports: fabric and newspaper, a sliced-up tent, a stretched umbrella, a chintzy fringed tablecloth. In this way his most relevant counterpart from the United States may be Robert Ryman, though while the American emphasized his paintings’ unorthodox supports by purging color, Mr. Viallat soaks his tarps and parasols with brushy strokes in a bright, Matissean range of blues and yellows, pinks and whites.

The early examples — the first one here is from 1967 — are more composed and symmetric; in recent years, Mr. Viallat’s palette has grown decidedly jarring, though the same ameboid form is still there, overlaying paisley swatches and sacks of fertilizer. It is glorious and timely to see them here, and not only because New York is undergoing a revival in abstract painting; one should always question stories of painting that put America first. 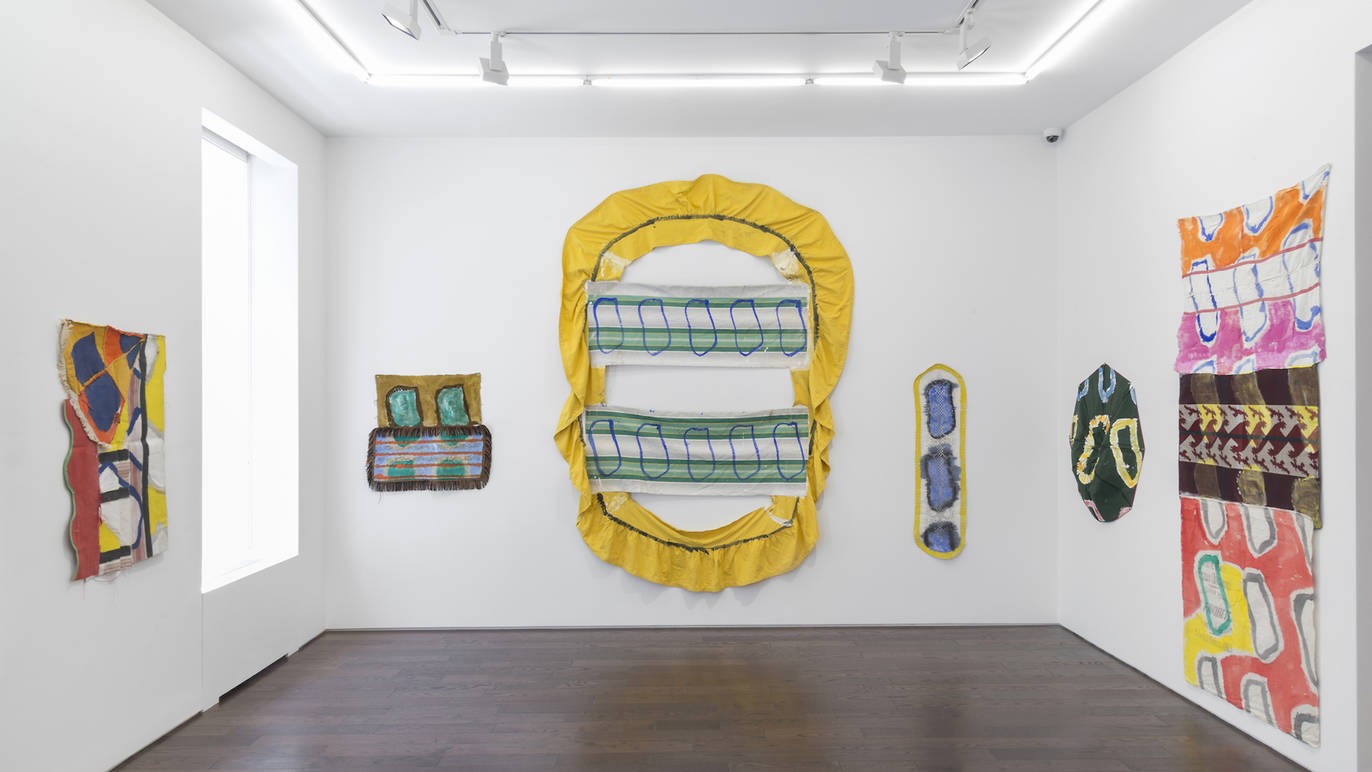