Because most of Claude Viallat’s interviews are not translated from French, I listened to most of the main ones on YouTube (from 2008 to 2017) to keep some excerpts of Viallat’s seminal ideas, in order to better understand his creation process, as well as Supports/Surfaces, and his own body of work.

It is grouped by main themes, and followed with good videos of retrospectives, and exhibitions.

“I am a son of Notaire, from a small provincial bourgeoisie. I entered the Beaux-Arts of Montpellier and Beaux-Arts of Paris, then the Prix de Rome” (Villa Medicis in Italy) (2)

“I started to paint at the age of 19 years old. I knew nothing about what color was. I had a hard time working it. (…) Little by little I studied color, I mean the material. It was especially in Nice that I had the opportunity to see the Matisse at the Matisse museum, and I learned a lot. I have always been fascinated alternately by Picasso, Matisse and Auguste Chabaud. They are the tripod of my work. (….) (1)

“That first exhibition about Chabaud made me realize that, compared to the academic painting shown at museums, one can work with a direct ans raw color, while using at the at the same time a simplification of things. “(1)

“One of the artists who influenced me was Auguste Chabaud, of whom I saw an exhibition in 1955, in Nîmes, and who is certainly the one who had the biggest influence in that he showed me a painting that was quite different from an academic painting.(2)

“At first, I was more interested in Picasso than in Matisse. Matisse was more difficult for me when, with Picasso, there was the deformation of the faces that fascinated me, as well as the expressionism of colors that fascinated me too. (…) For a long time the paint of Matisse seemed to me very simple, and very obvious, while actually there is a huge work behind. It took me some time to understand it (…)  and it took me some time to simplify my work, synthesize things, to get to accept the relations between colors as they are, and to accept the canvas as medium. (4)

“(…) During my Art school period, it was first Picasso, then at the Beaux Arts of Paris, it was the Americans like Pollock and Rauschenberg“(2)

(…) I was influenced by everything that was shown in American painting, Abstract painting, Pop art and so on, until that day when attending the exhibition at gallery Maeght “20 years of contemporary art” *, I realized that my work was scattered in everyone’s work. It was from there that I started to do the opposite of what I saw. I started working with raw canvas and putting the minimum of layers of colors which does not prevent to have several colors. I learned progressively to understand how the raw not primed fabric I was using absorbed the colors, which forced me each time to reinvent a technique. (2)

At first we had little information about American painters, and imagining Pollock, we had the feeling that the United States was making gigantic paintings, like the size of their continent, and suddenly we tried to make inordinate paintings by working with very large fabrics. (2)

*after some researches the title of the exhibition was « L’Art vivant aux Etats-Unis »(living art in the US” at Fondation Maeght in St Paul de Vence – http://www.fondation-maeght.com/fr/expositions/passes

ABOUT THE CREATION PROCESS

“I used to tell my students, paint and you will learn how to paint. I put myself every morning in a situation where I do not know what I’m going to do, and I learn, as I do, what I do. Once the painting is finished I analyze it, and analyze it in relation to all the paintings that preceded me to see all the situations that I could have approached, and that I did not tackle. At the same time I project the later possibilities of this work. And then I start painting again and put myself in the situation of not knowing what I will do so as to paint in the most inconsequential way. In fact, what I’m looking for each time is to surprise me. I try not to be in something that is agreed upon, I try not to be in something suitable to be in something that I would like unbecoming, even incongruous. (…) I try to put myself in a situation where work is slipping, moving, “(6)

“I try to make the work clearer, the most demystifying, the less masterly as possible, in order to deliver a painting that would be obviously simple.” (8)

“Within the painting, I can sometimes recover elements that will add some sort of joke, which I do not do with objects” (8)

“I think that I mix my work as much as possible, that is to say that I take what I want to take. I go where it seems good, where there is something that can get out of balance. It is this idea of balance / imbalance that interests me the most, that is to say that, whether in objects or canvases, I always try to be at the limit of what is suitable.”(8)

“I am never in a finished work. I will never refine something that needs to be put in place. Things have to be where they start to exist. Anything that could give them a semblance of luxury or sturdiness or a more artefact side of it all I do not approach.” (8)

“The assemblies of fabrics are handmade prior to paint. I always make my support before painting “(7)

“Creating the “support” at first is a way of creating already within the fabric, encounters, constraints, and a wide range of material and color relationships. It is forcing or shorting tissue surfaces that can be contradictory, and managing to fix all that with color. It’s the color that will take over and bind a little all together”(7)

“The fabric is there ready to offer me its traps. (……… ..) I am quite opportunistic. That is to say that each time I take a canvas it would offer me opportunities and I would work these opportunities by accepting what the hazards of work give me to take advantage of this situation. “(6) 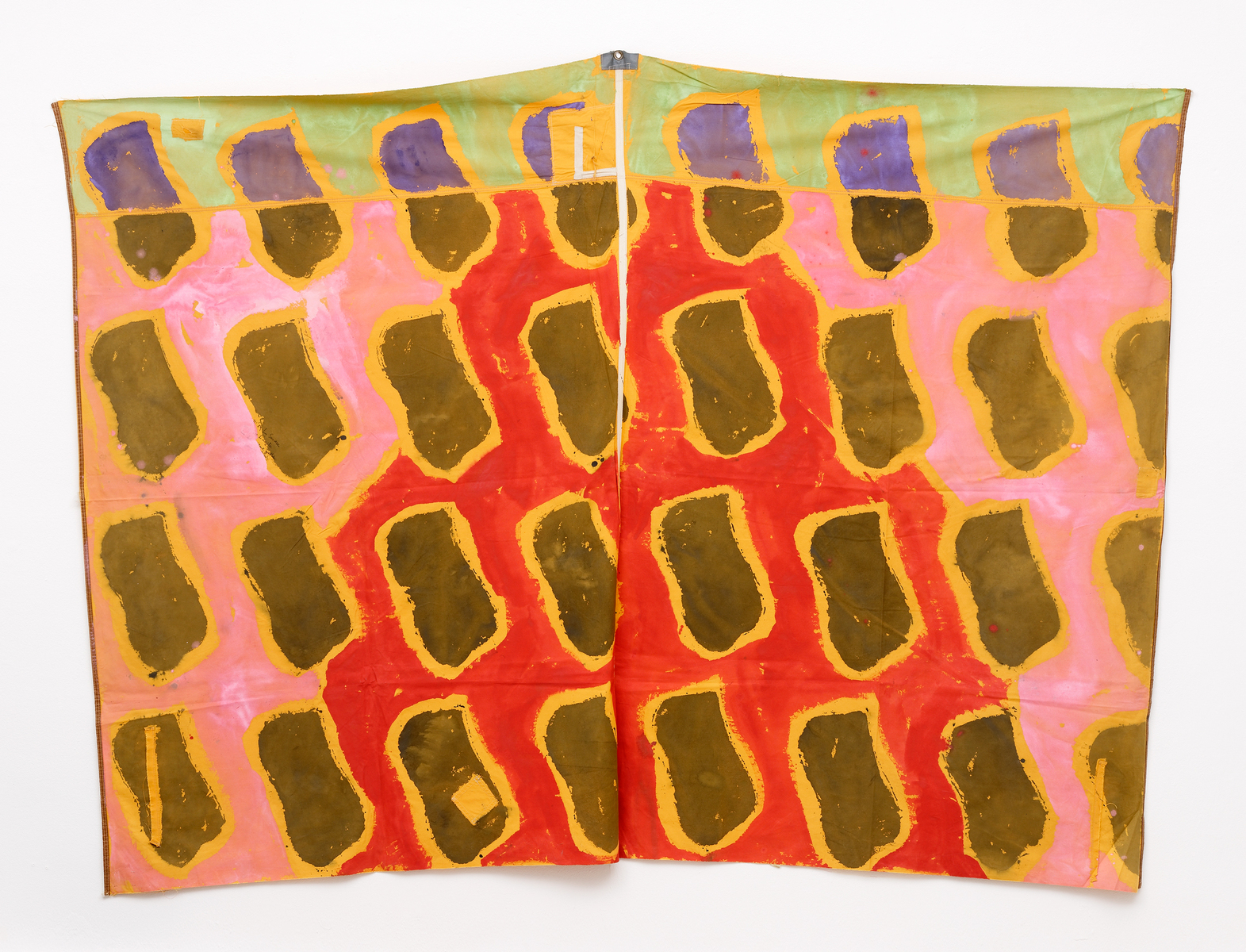 THE SENSUALITY OF COLOR

“When I paint, I try to paint in the most natural way possible, that is to say that the colors will sometimes overlap, and there will be places where the color is lean, and other places where the color is pasty. The paint and color play with the plane of the fabric and it gives me what I call the sensuality of the color. The color is not neutralized on the surface. It will never be neutralized. And most of my paintings have this quality to be quite often kinetic, meaning that when you look at them, the color moves a little “(7)

ABOUT HIS SIGNATURE SHAPE

“For me the shape does not matter at all. It is a working system. Of course I cannot change it because if I change it I would specifying another one in the same way as this one. My purpose is more to take a surface, to chant it, to find a rhythm to work with.”

With Saytour et Dezeuze we already exhibited all together since 68. I knew Dezeuze from the Beaux-Arts of Montpellier but he lived in Canada at this time, and for Saytour I met him in Nice, in 1967, and me I was living in Limoges.(3)

During the interview there is a mention of the very first movement, Claude Viallat belong to “Textruction” with an exhibition in Limoges ” Textruction” in 1972 (with Pierre Courteau, Jean Mazeaufroid, Michel Vacher, Claude Viallat and Georges Badin) (3)

” The drift woods are not denatured, the most I do to them would be a little hole”(1)

“I try to remove from the object anything that could be talkative” (…) “The objects have a precariousness, it is the minimum of the minimum of the DIY, that is to say that it is the most tenuous thing which one can do with the elements which constitute it, but at the same time the most strongly significant. (…) It is necessary that the object is never constituted in a heavy way, but with minimum DIY, and a relative equilibrium
The simpler things are, the more charged they are (meaningless). (…) I try not to redouble my ideas. I try it every time a little different.(8)

“I am someone who lives the time in a very marked way, I watch the clock. At the same time I try to waste time in order to save some”(6)

DEFINITION OF A PAINTER

“Nowadays I see that communication has become paramount (for an artist) . It passes sometimes prior to “making art”. A painter is someone who paints. A painting must be crafted. It founds its essence in its making. (…) What interests me in painters is when they introduce a mechanical, in the sense of automaticity not technology.”(2)

“Among my students there’s a bunch of artists that I respect a lot such as Stéphane Bordarier, Dominique Gauthier, Serge Fauchier. They are important painters as well as many others I could cite also”.(2) 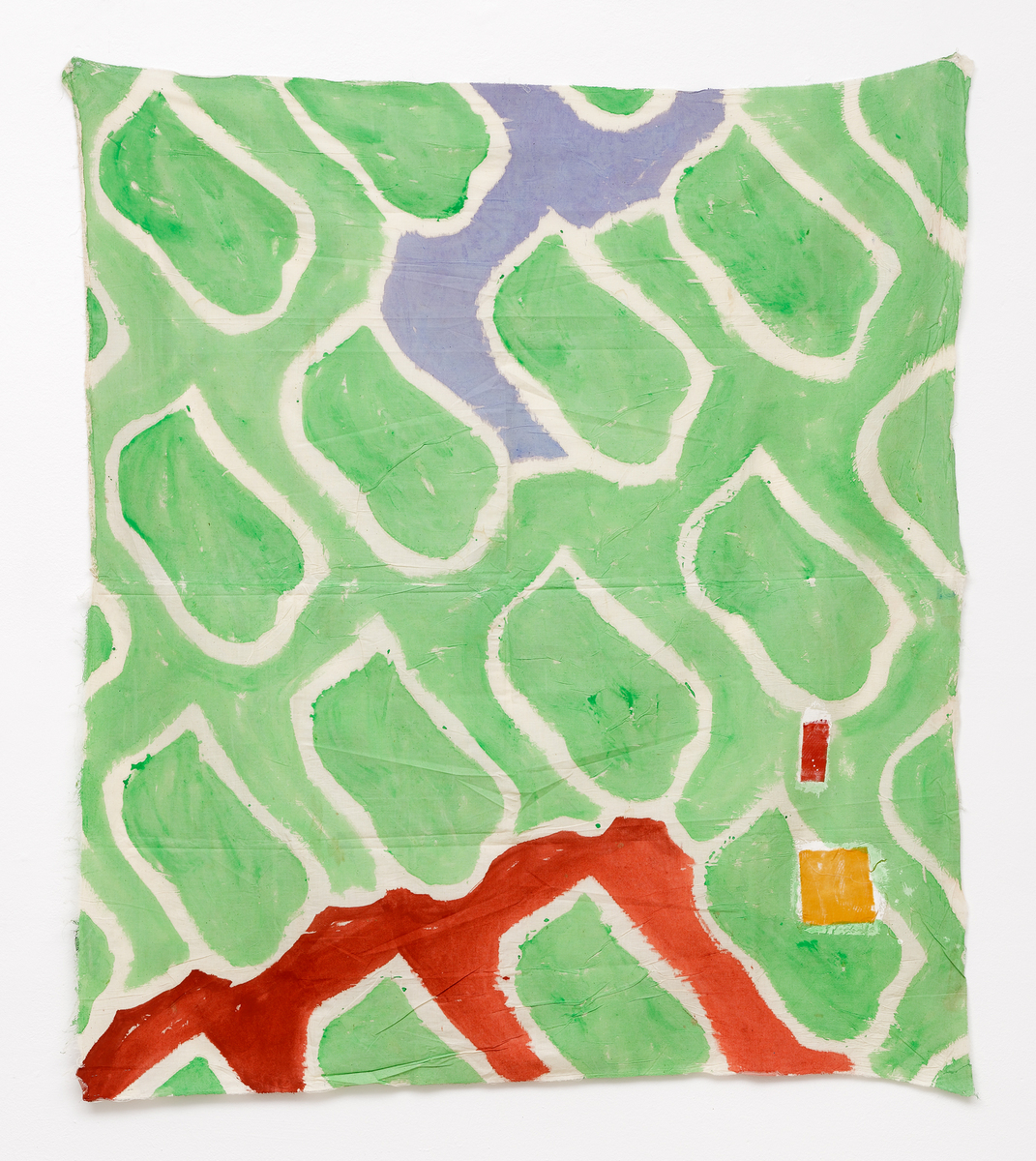 be-Art Magazine, a unique process to select the art