An invitation to mediation.

Ichiro Irie, owner of JAUS, has presented this early September an excellent exhibition that leads to meditation. Is that the influence of these many yoga classes that flourish in every neighborhood in Los Angeles? The Three painters shown have indubitably poured something special on their canvas that transcend the obvious at first sight minimalism.

Paul Gillis presents some pieces of his series One, a series of Graphite and acrylic polymer on burlap. The pastel tone of the colors chosen would mean the artist concentrates only on the possibilities of dialogue between the geometric forms on the same canvas. Each form spreads over the entire canvas and yet the artist makes them live together in peace. The whole breathe with a positive energy that Agnes Martin would have loved.

Shingo Francis pays also tribute to Agnès Martin with a series of pastel colored square “Interference” with an interesting shift. The artist has transformed the central square with an iridescent paint that vibrates as you walk. 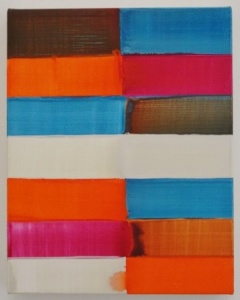 Darcy Huebler shows a series of little paintings with horizontal colorful brushstrokes with which she exhausts the possibilities of repetition.

Related posts brought to you by Yet Another Related Posts Plugin.