In September 1970 an exhibition titled Supports/Surfaces opened at the Musée d’Art Moderne de la Ville de Paris. Chosen by the artists themselves, this now-famous title has come to designate a group whose practice significantly changed attitudes to art-making in France.

They formed one of the last avant-garde movements, contemporaneous with Arte Povera in Italy and Land Art in America, among others. What was singular about these artists is that, with the exception of Pagès and Grand, they all called themselves painters, even though their works disconcerted viewers used to the standard form of canvas on stretcher.

The exhibition “Supports/Surfaces : Les origines 1966-1970” shows how their innovative
approach took shape in the years leading up to their emergence as a group. To understand this short-lived yet important movement, it is necessary to explore those four years of research, confrontation and opposition that led to Supports/Surfaces. This was a time of extraordinary artistic effervescence in what was itself a moment of great social and political upheaval, climaxing in the events of May 68.

The history begins with the crisis besetting the easel painting, or indeed its actual
dismantling, effected by artists who, shortly after graduating from the Beaux-Arts, broke free of the heritage of the School of Paris and looked to American abstraction, which was little known in France at the time (room 1). This challenging stance was shared by artists such as Pierre Buraglio, Jean-Michel Meurice, whose work remained close to that of Supports/Surfaces, or again François Rouan and Michel Parmentier, who developed in other directions. This
“deconstruction” of the painting ran counter to the techniques the artists had learned. It bore
directly on their own practice, as can be seen from the paintings they made during their
formative years. A significant moment was the exhibition Impact, organised by Claude Viallat in Céret in 1966, which brought together Pierre Buraglio, Daniel Buren, Michel Parmentier and
François Rouan. All these young artists shared the desire to break free of the conventions and
closed space of painting and to locate their work in a “degree zero of painting.” Nevertheless,
for the artists who formed Supports/Surfaces this degree zero was not conceived as an endpoint or an iterated position, as it was by BMPT, but rather as a new direction for pictorial practice. In the Céret exhibition, Viallat turned the picture object round and displayed its back in what was his last canvas on a stretcher before, in the weeks that followed, he began working with a repeat imprint of a form on loose canvases. In the same year, Daniel Dezeuze, who at the time was living several thousand kilometres away in Canada, cut into the surface of his paintings, pulling out fragments of fabric.

In 1967–1968 (room 2), the artists honed their practices. The stretcher simply covered
with a sheet of plastic by Daniel Dezeuze expressed the maximal reduction of painting to a
material structure supporting the plane. The work is open to the wall, manifesting a surpassing of the closed space of the picture object. The use of imprinting or folding, or the process of steeping in colour used by Noël Dolla or André-Pierre Arnal, or indeed Viallat, combines the production of form and colour with the materiality of the support, and these processes, like the repetition of the motif, liberated the work from composition. 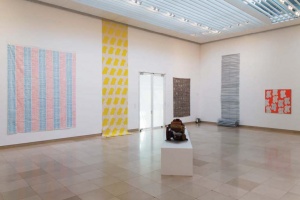 These approaches were also constructed within a confrontation with Nouveau Réalisme
(room 3). The stamps with which Louis Cane, declared himself a painter (“artiste peintre”)
contrast with Arman’s. With Pop Art dominating the art scene and Andy Warhol’s silkscreen
multiples appearing to offer a way beyond painting, the artists of Supports/Surfaces, several of whom lived in Nice, the city of Klein, Arman and Martial Raysse, but also Ben, effected a kind of reversal that inscribed the object in the pictorial field, as in the work of Daniel Dezeuze, Noël Dolla, Patrick Saytour, or in the sculptural field with Bernard Pagès. In complete contrast to Warhol’s wallpaper, the repeated form deployed by Claude Viallat was not used for uniform,
industrial production but became the matrix of a pictorial process that called into question the
uniqueness of each of the works in the relation between form, colour and support. 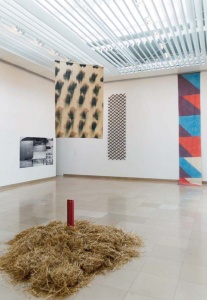 The first connections between the artists were also made in the South of France: these
were the open-air exhibitions that brought together Daniel Dezeuze, Bernard Pagès, Patrick
Saytour and Claude Viallat in the little village of Coaraze outside Nice (room 4). After having
broken free of the picture object, the artists experimented with new ways of presenting works
liberated from the usual artistic conventions. During the summer of 1970 they laid out their
works in the village streets and on the beaches, so that they became part of the landscape and
challenged the traditional opposition between nature and culture. Returning to conventional
exhibition venues, their art fully occupied and became part of the space. 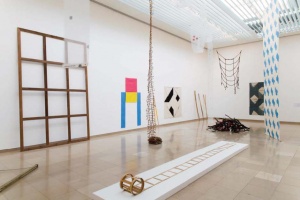 The fifth room will show how painting occupied space, often away from the wall. In its
opposition to Nouveau Réalisme, and with its outdoor exhibitions in a rural setting,
Supports/Surfaces challenged fascination with industry that characterized the post-war boom
years. 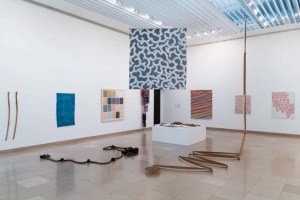 The group represents a movement in the opposite direction, following an interest in basic
transformative actions, in materials and objects shaped by use, and, finally, pursuing a footloose practice of painting that cannot fail to strike a chord in today’s world (room 6).
Bringing together major works from the period, some never shown since they were first
made, this exhibition rehearses the great questions explored in the artists’ different works: the
crisis of the picture object, the confrontation with the Nouveaux Réalistes and a certain idea of
the death of painting, outdoor exhibitions, the deployment of artworks in space, and the
importance of the object and its manipulation. It also features a substantial set of documentary items, comprising posters and tracts from the period and writings by the artists actively involved in the formation of the group. It aims to offer a new vision of the Supports/Surface movement by focusing on these years during which its artists set out with real relish to reinvent their
practice.

Video of the exhibition and Interview with Claude Viallat – courtesy rikedenimes

Support Surfaces is alive and well at Cherry and Martin