ALIX LE MELEDER was born in August 1955, the 29th in Boulogne-Billancourt, France.
She lived and worked in Paris until 2011, and moved to Vézelay, in Burgundy, where she currently lives and works. She lived the first months of her life with a nurse in the Pyrénées, in France. She spent her childhood in Algeria until 1965, and her teenage in Essone, France.

Two significant exhibitions would make a profound impact on her life: the visit at the Van Gogh Museum, in Amsterdam, and the Picasso Retrospective, in 1966, at Grand Palais, Paris, France.

After she went to the Beaux-Arts to study sculpture at Cesar’s atelier she eventually graduated with a diploma in painting as a free student, in 1979, but she stopped painting until 1985 when she moved to Warehouses of the Quai de Seine in Paris, 19th district, that happened to be destroyed by fire in 1990. All her paintings were destroyed. After two years spent at the studios of Argenteuil, then at the “ephemeral Hospital” Bretonneau, she finally moved to a studio in Paris, the 13th district. She  met artist Shirley Jaffe, who introduced her to the the famous gallery owner Jean Fournier. She would remain very close until Shirley’s death in 2016. She joined Galerie Zürcher, in 2004 with whom she exhibited regularly in Paris, and New York until Bernard Zürcher’s passing in 2017. 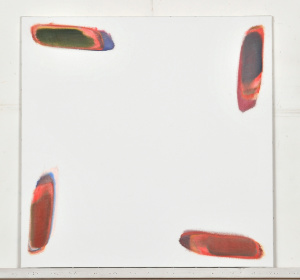 1990: Alix’s studio burned the day she began to be dissatisfied with her painting, which she considered too self-absorbed.
1998: First appearance of the cruciform composition on the canvases
2002: Beginning of the series “Four”: the stains appear clearly grouped in four on the middle of each side of the canvas.
July 2011: She decides to stop painting. The painting has finished its work” 1 (Pierre Watt). She moves from her studio, rue des Rentiers, in Paris 13th district, to Vézelay.
Spring 2016: publication by Tituli of a collective work (edited by Jean Daniélou) “Alix Le Méléder: Traces, painting” (French only) with authors like Yves Michaud, Patrick Autréaux, Jean Daniélou, François Ballaud, Nina Leger and Pierre Wat. 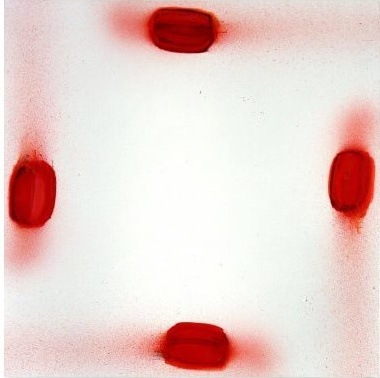 About “dans l’instant” an exhibition at Galerie Zürcher, in 2006

“The painting of Alix le Méléder is very simple to describe” says the French art critic Philippe Dagen in 2006, “The paintings are square format.On the white background, the artist places approximately in the center of each side and near the edge, a colored, rather oblong shape, an oval more or less stretched.The center of the canvas remains white, empty of any pictorial presence. (…) What the description does not explain, it is the astonishing diversity of sensations and immediate or slower reactions that Le Méléder raises with this uncluttered device (…) “

“Painting is no longer locked in the criterion of figuration” Le Monde July 7th, 2004

(…) This “postmodern” abstraction is that of the Americans Lydia Dona or Stephen Ellis, the English Fiona Rae, the French Pascal Pinaud, Jerome Boutterin and Remy Hysbergue. It is characterized by its technical mastery, which goes hand in hand with the reasoned use of carefully measured pigments, resins or lacquers. Technical experimentation is preponderant and the networks of pictorial and intellectual allusions are dense and scholarly.

This situation, which makes abstraction a pictorial genre in the same way as, in the past, the still life or the landscape, does not forbid that novelties are sometimes revealed, when the personal requirement does not yield to formal concerns. This is the case of many of the painters just mentioned. It is also that of an unfortunately unknown artist, Alix Le Méléder. (…)

There’s a void is in action, and I become like a receptacle. Only then I intervene on the canvas in this moment on hold where everything agrees, answers and becomes one. As I said, the painting is put on the canvas with such evidence and there, the painting occurs, it is very simple. Alix Le Méléder (p 673)

My work is all on the perception of time and it brought me to this cruciform composition,” she says in an interview with Beatrice Chassepot

(…) I turn the canvas in the four directions, it is the canvas that moves, I remain motionless (…)

(…) the white in the middle of the canvas is essential

(…) The painting is finished when it finds its own unity (..)

(…) I do not want to have a project or to use a topic. I want to discover diverse states of consciousness or states of being by painting”

(…) I do not make a repetited work.There is an evolution of the path in my work” interview with Patrick Autréaux

Alix le Meleder is a one of a kind painter. She pushes the boundaries of paint very far. Alix le Meleder exhausts the possibilities of painting with a radical gesture when she avoids any kind of consciousness.

This is unbelievable to see those lookalike paintings acting so differently. Sometimes the oval shape is vibrant, even more violent, like fighting with another one on the canvas. Sometimes those shapes interact with each others around the white empty space, like in a joyful dance.

Now that Alix Le Méléder has a long rich career behind her, it’s time to see the whole picture and figure out who good she is. French painter Alix Le Méléder obviously opens up new paths of paintings. Beatrice Chassepot 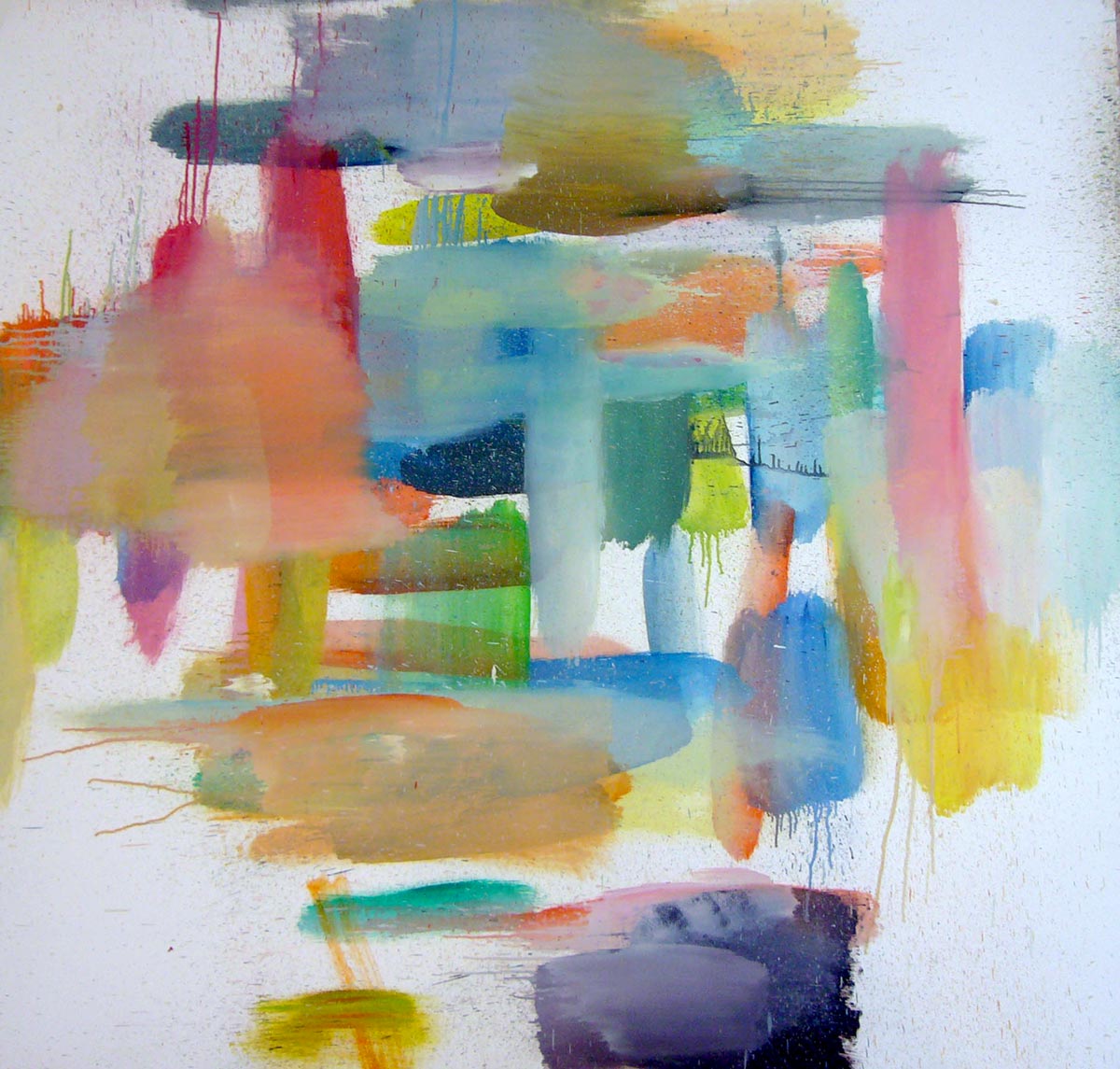 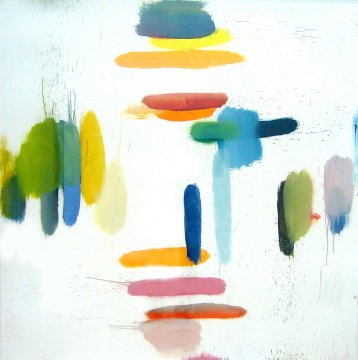 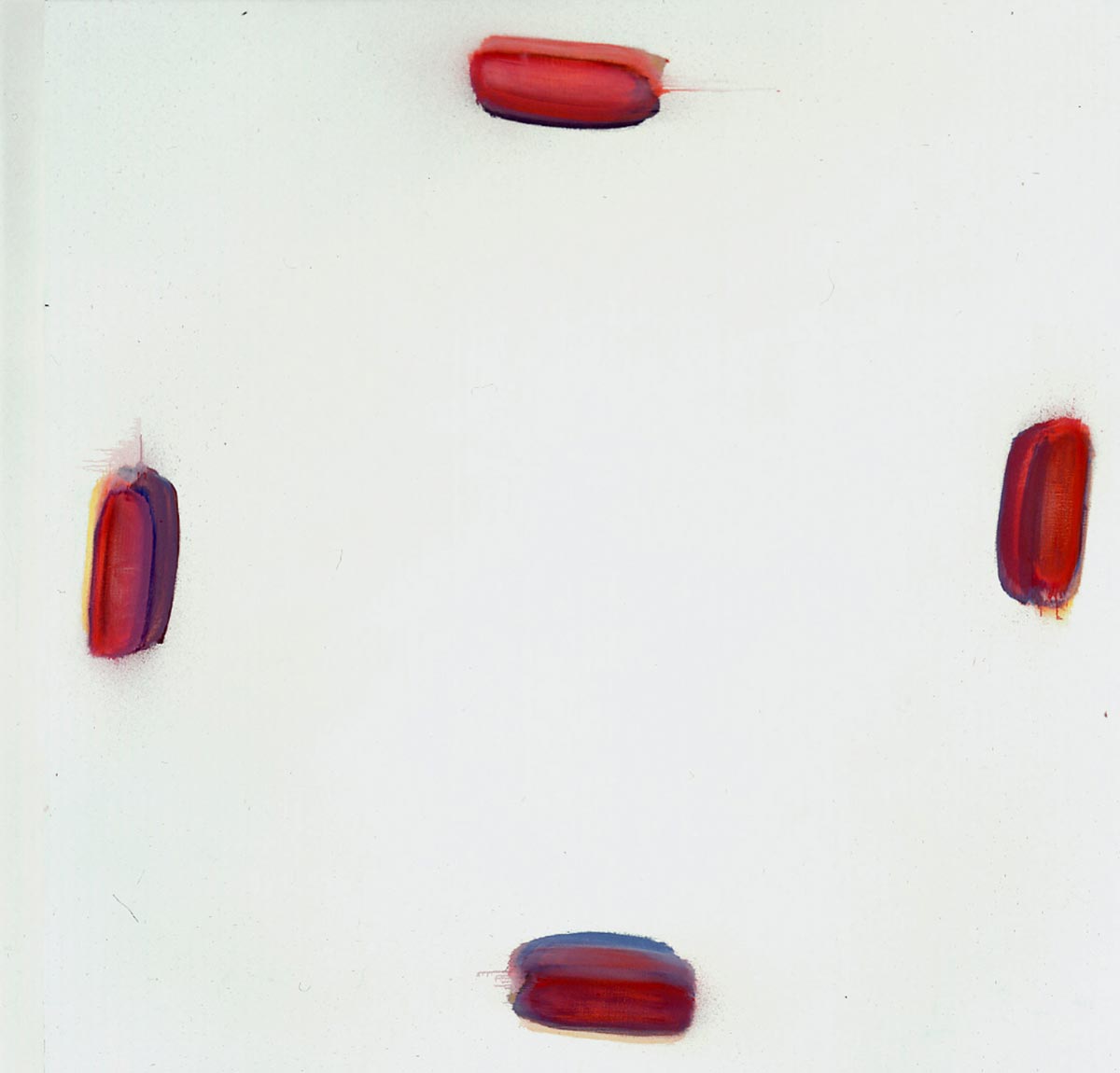