DAI ITO was born in Tokyo, in 1978
He currently lives and works in Tokyo

That installation of black and white photographs capture instantly the retina as a whole, and in the details. Before to analyze what’s going on there, there is a feeling. A great good feeling that something big is developing all through those black and white waves, some sort of visual poetry.
Deeply attracted the eye leads you to the details. Each photo works as a clue that would lead to the other one and so forth. Each one photograph is a high quality photograph in itself. The tones of blacks and greys contained in each one is impressive and remind the quality of blacks found in Hiroshi Sugimoto’s photographs 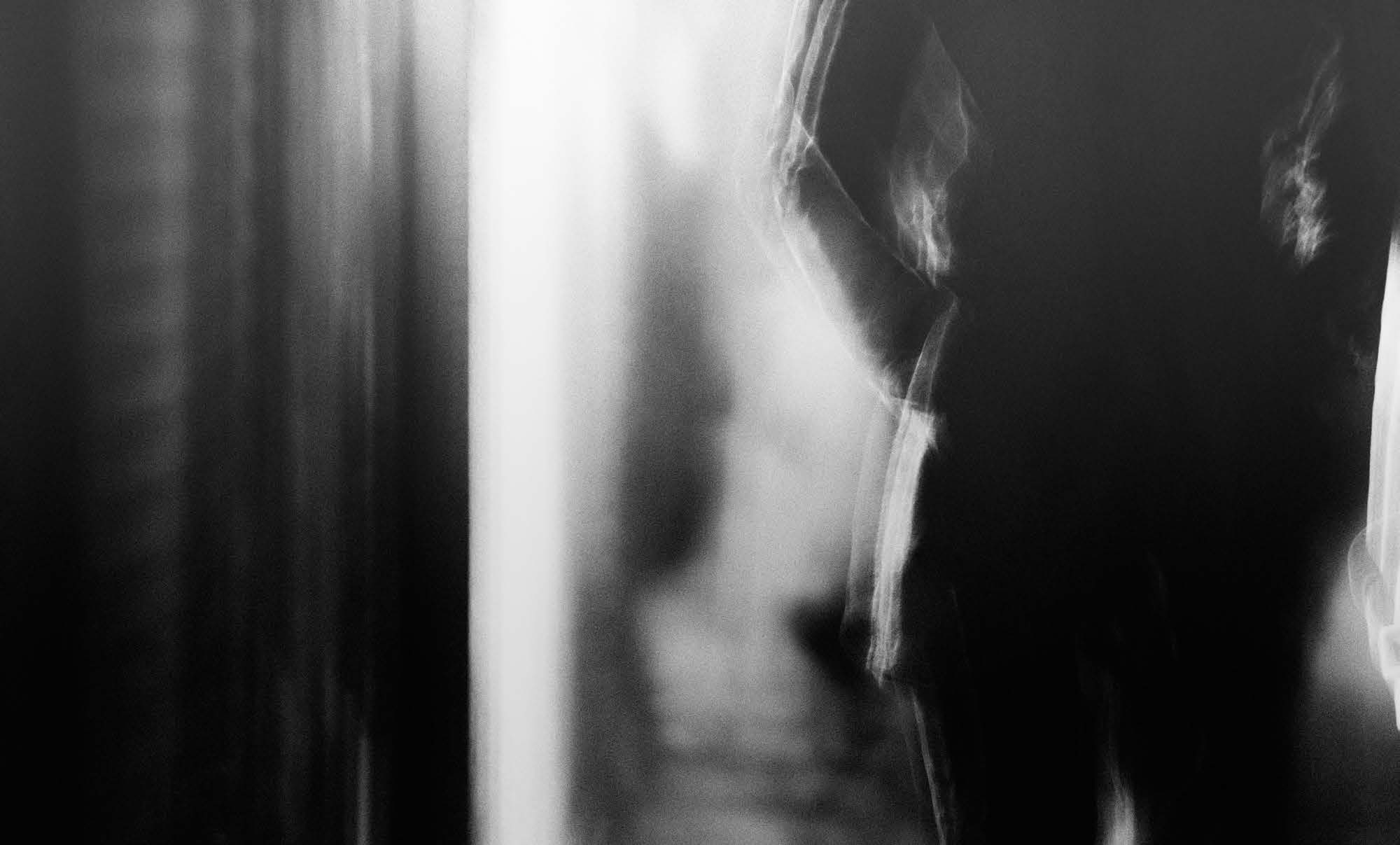 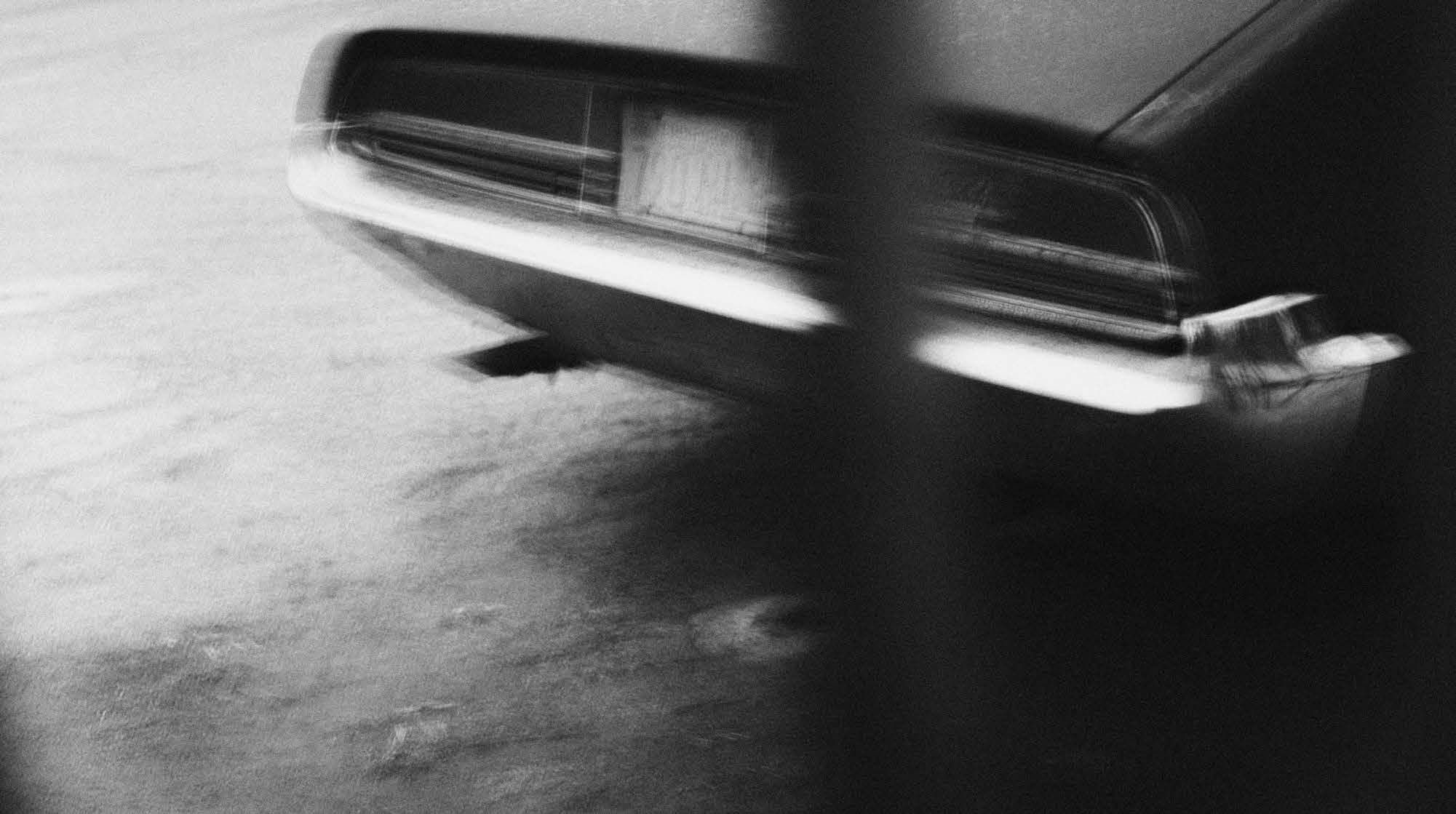 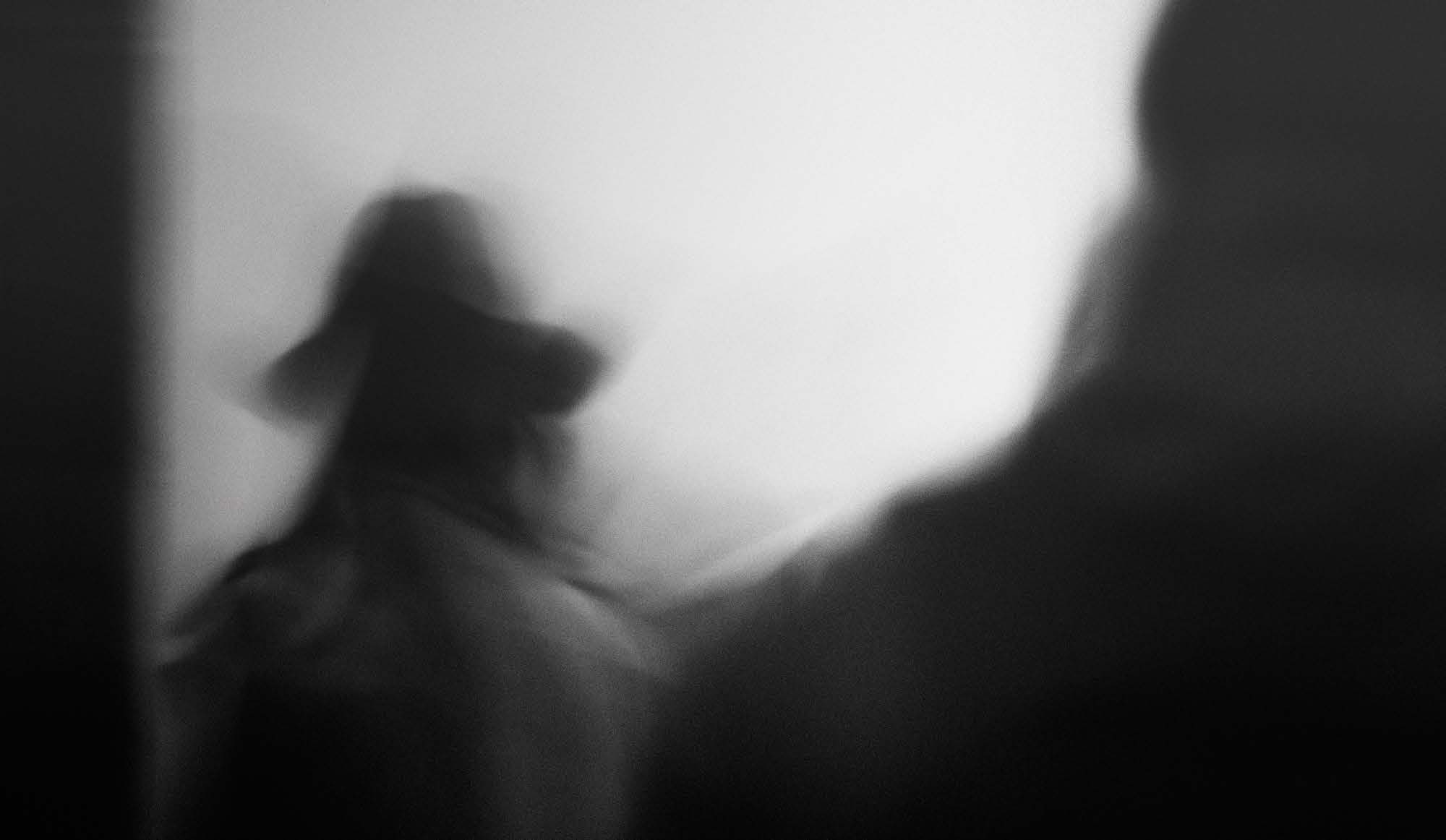 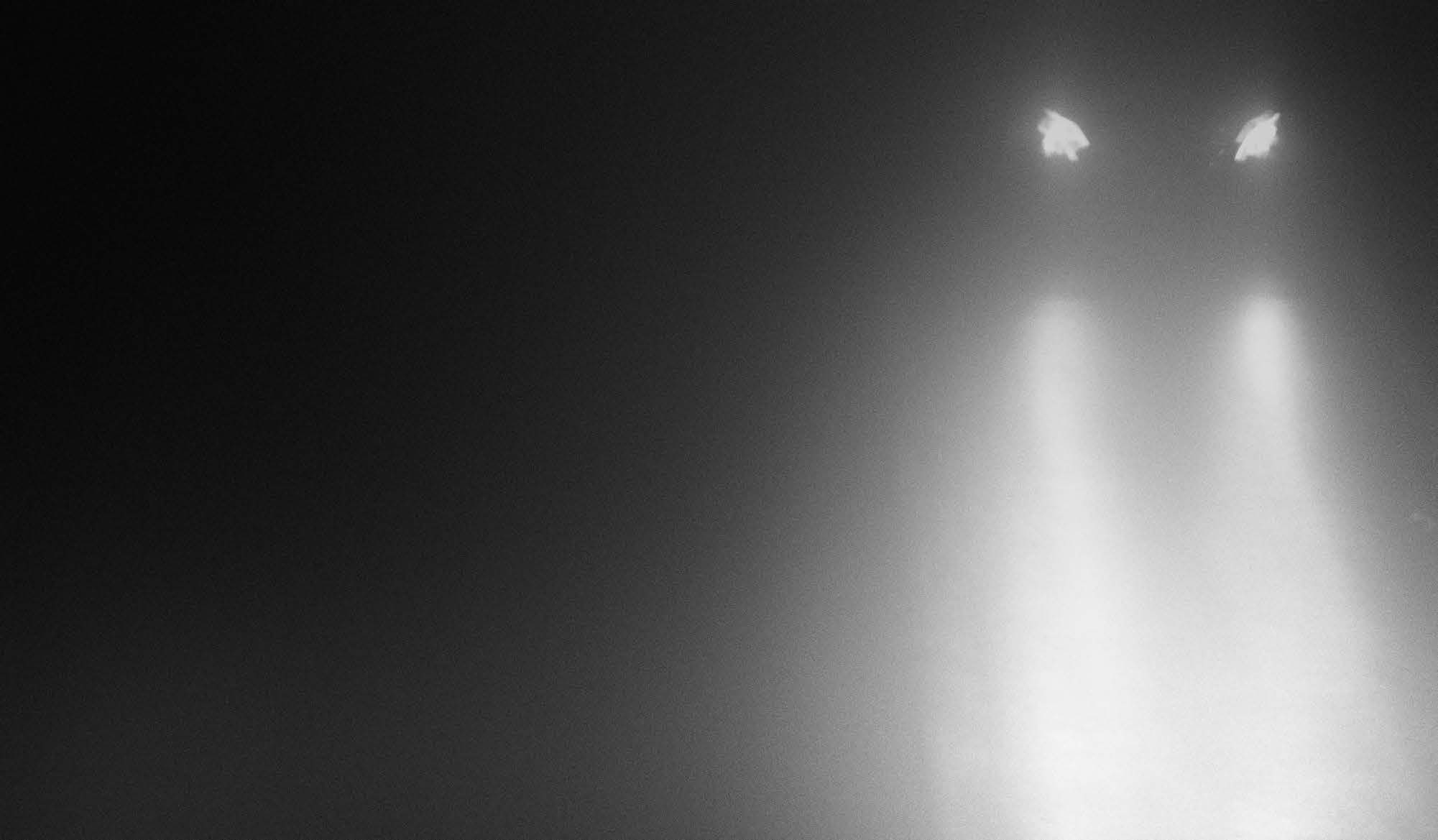 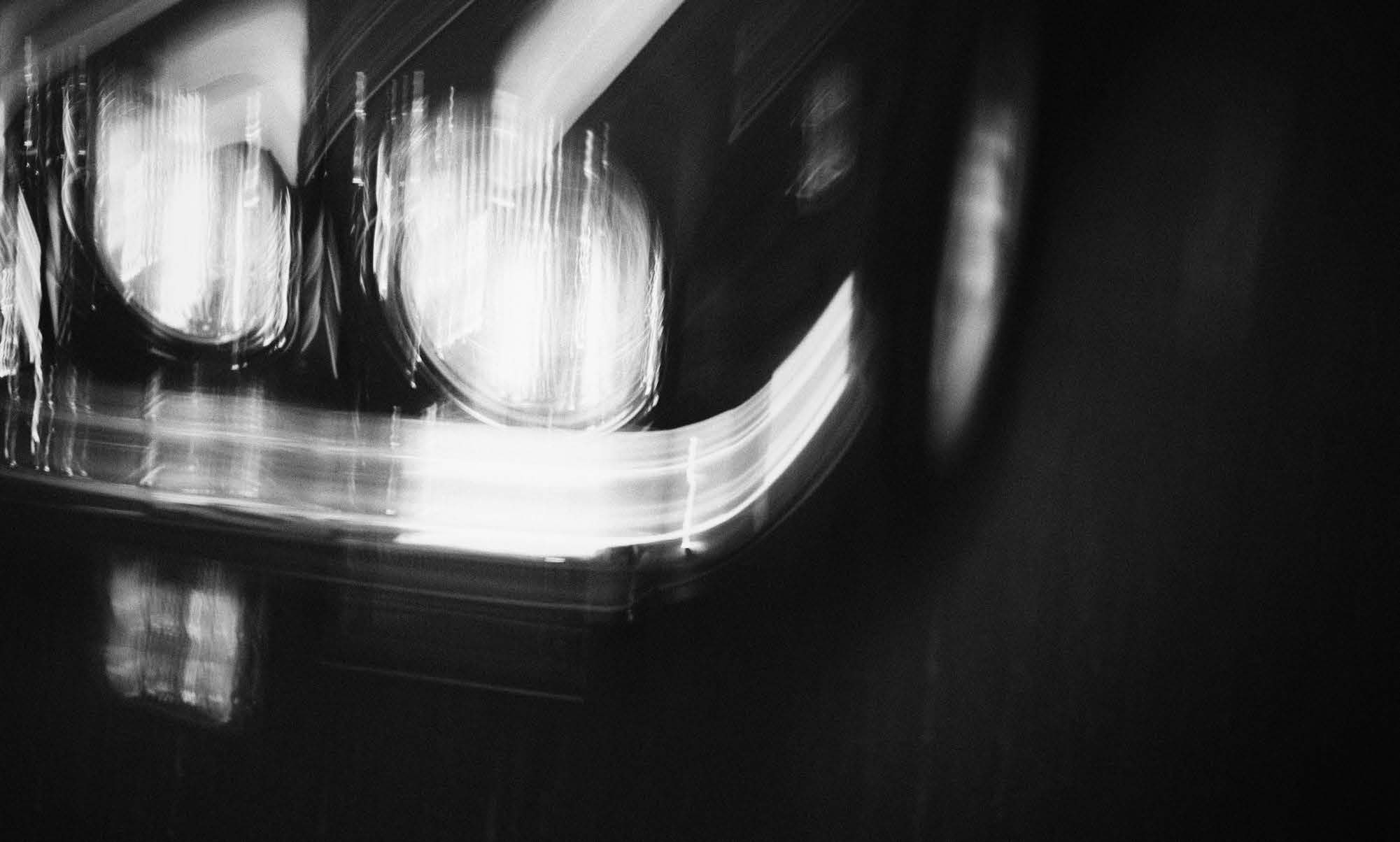 Better than someone’s words here is Dai Ito’s words to explain his work:

The concept for my work, “Tinker Taylor Soldier Spy” is inspired by the novel of the same name, written by John le Carré in 1974. The protagonist of my story is, MI6 agent Bill Haydon, played by Colin Firth in the film adaptation of the novel, directed by Tomas Alfredson in 2011.

First, I wrote my original story which was inspired by the novel and film, then I made the following story with the series of photographs. The idea of my story came from my imagination, about Haydon’s skeptical feeling and his question to his mission and the society. Before he betrayed his country by turning to be a KGB double agent in U.S.S.R, perhaps he might have small conversation with his best friend or family, about his doubtful feeling to the society. But the conversation might not be so clear, to avoid to be realized his real feeling by others.

While my written story tells about his real feelings, my photographic storyboard tells his ordinal days as a double agent in MI6 in London. The viewers can put themselves
into reconstructed new Haydon’s world by both looking at the photos and reading the story, from both of his real emotion and his ordinal days.

This work is consisted by the mix of 6, 8, 10, 11.5 inches’ photos. It is also installation art, like a visual reproduction of the musical score “La Mer” (English title is “Beyond the sea”) composed by Charles Trenet and sung by Julio Iglesias in 1976, which is featured as the theme song for the same titled film. The positions of photos are imitation of melody of the song and the bass line I arranged, and each 6, 8, 10, 11.5 inches’ photos correspond to 8th, 4th, 2nd and whole notes in the score. Some of photos are protruded from the wall by mounting on thick foam-board with bock
bases, which has 13, 23, 43, 63mm thickness, while others are mounted on 5mm foam-board. These protruded photos mean longer notes like dotted
or triplet notes than normal notes. Also, I tried to express musical expressions “Crescendo and Diminuendo” with making steps, using by these different thick bases from 8mm to 63mm. With this way, I tried to approach to “Tinker Taylor Soldier Spy” from musical aspect. 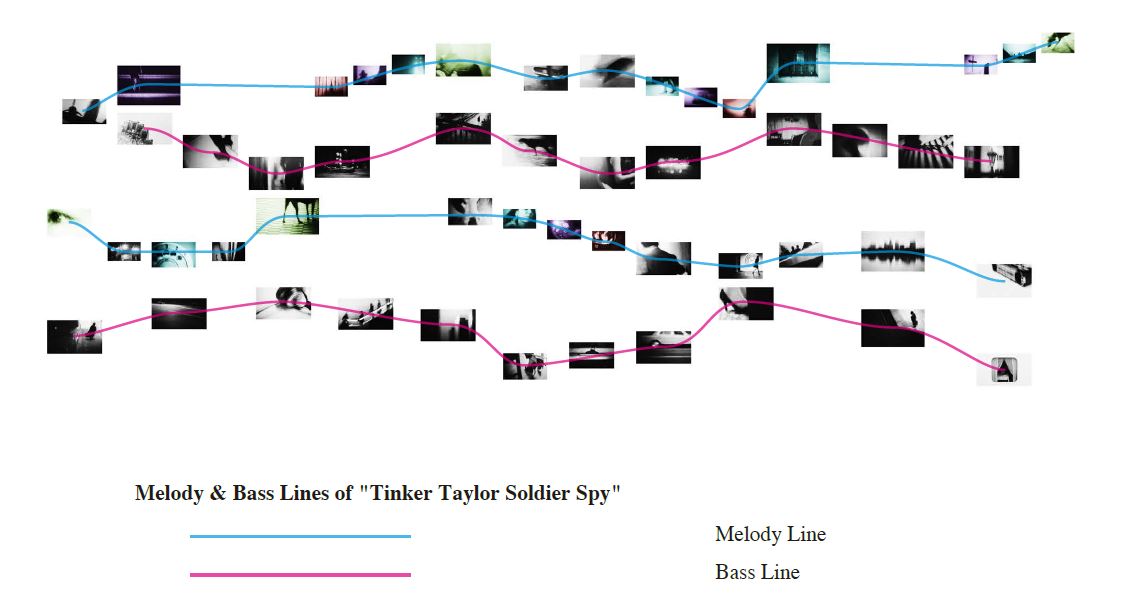 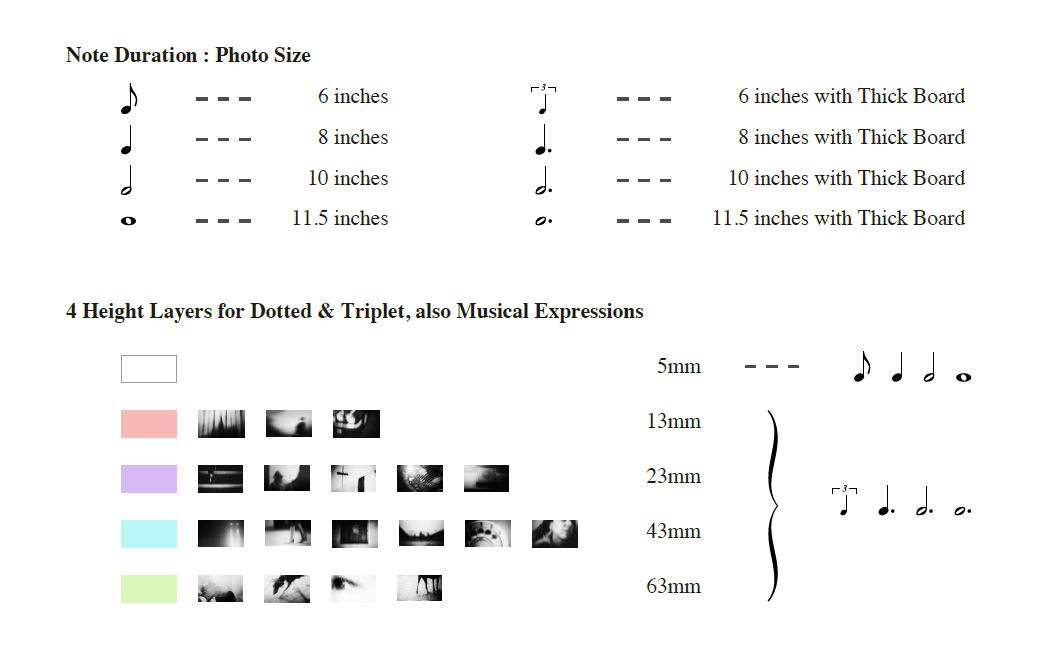 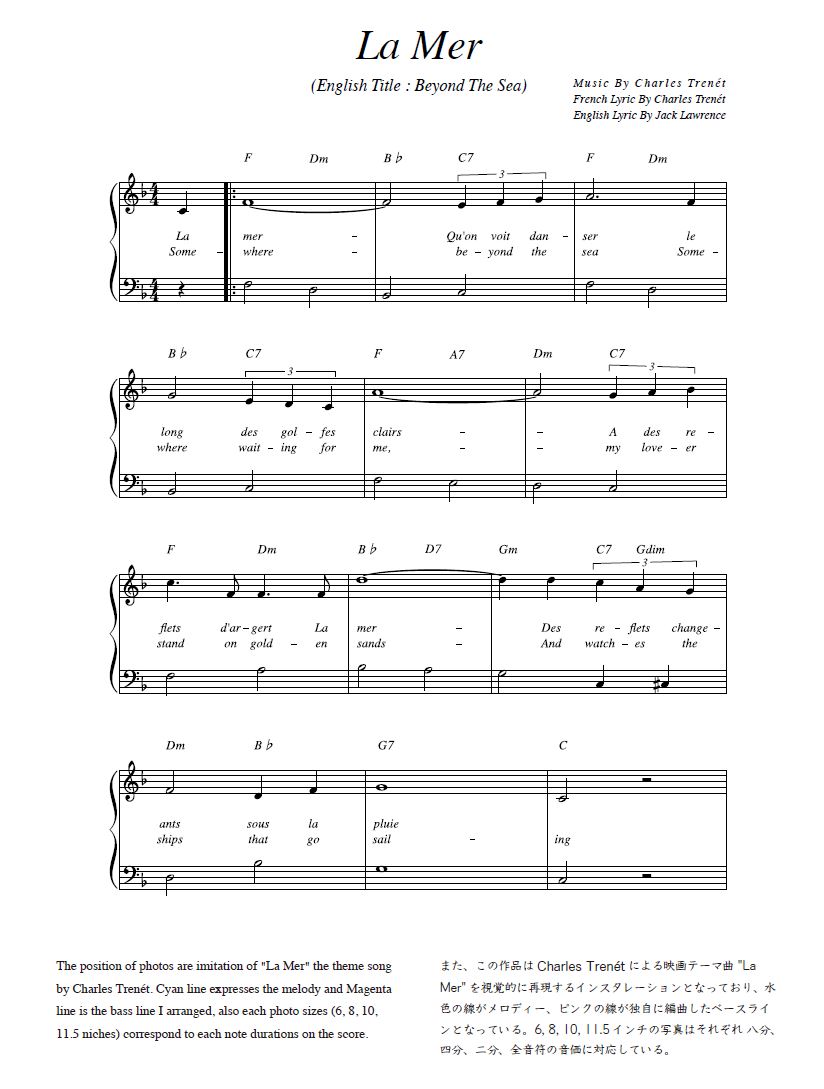 Lately, there is something that I can’t stop thinking about.
I wonder, do we create images of others based on our own desires and fears,
just to affirm our prejudices?
And do these images make us take action that relies on these illusions?
If we believe in our illusions, it’s impossible to discover the truth.
For example, look at the guy walking on the street.
He looks bored and grumpy.
That’s my impression.
Even if I could create an image of him, I wouldn’t actually know who he is, where he’s from, or what he’s thinking, right?
So, we have to abandon our illusions and discover the truth about him instead.
If the truth is entirely different than our illusions, we may just lead ourselves to a better place.
Of course, some people will lie and scheme in order to hide the truth.
How would we feel if we believed a lie, but in the process, also overcame our selfish desires and fears as a result?
Perhaps, believing might be something like having a dream that you don’t wake up from.
And in fact, we were happy.

I’ve been in France 3 or 4 times, and all were traveling.
The 1st stay was around 1999, just for trip.
The 2nd trip was Business in 2006, as a director and producer also music composer of short film animation team 6nin, we were invited by Centres des Arts for a week. During the 2nd staying in Enghien-les-bains, we had a workshop and screening, also presentation of our works, at same time Isao Takahata from Studio Ghibli and Koji Yamamura were invited as well.
The 3rd trip was in 2011, I thought I would like to go to post graduate school for study art in Europe, so I went around many European countries for 2 months, like France for a week (Paris, Dijon), Spain (Barcelona), Belgium (Brussel), The Netherlands (Rotterdam, Den Hague, Amsterdam), Germany (Berlin), Croatia(Split & Dubrovnik). The longest stay was 3 weeks in Berlin. Mainly I visited my old French and German friends I met before, they are still really good friends.
The 4th trip was in 2016, for taking part in Photo Festival in Arles, for a month. I went to Montpellier to see my friend who I met in 2006 in Paris, she is now teacher for CG in the university, and her friends. Then I went to Arles for a week. After Arles, I went to Barcelona, Dijon, Berlin, Split, Dubrovnik, same as the trip in 2011. Because I would like to say hello who took care of me in 2011 🙂
Other countries are, I was invited by International Film Festival in Seoul, Korea in 2009. And of course Los Angeles for 4 or 5 times from 2014 to 2017, and 1 time in Texas for 2 weeks, and 2 hours in Mexico in 2016, and NY, SF…